Rustler, Canyon, Callaghan, many many others

Arthur is a young fox who lives in Cuddletown.

Arthur looks almost just like Dagur, except he is not quite as skinny, has longer headfur, and a scar on the left side of his face that goes from his ear to his chin. His eyes are basically green, though the left one is more blue, and the right is more yellow.

Arthur is usually nice and polite and kind, just like Dagur, but he tends to be a little more impulsive than his brother. He is also very smart, though usually not as good at Dagur at coming up with plans, and not as cunning.

Ever since they first met, Arthur has liked Dagur, although at that time, Dagur wasn't in any position to be friends with him. After the Cuddletowners discovered that Dagur was blackmailed into spying for Rustler though, they forgave him and helped him by rescuing his mother, who Rustler had been using to force Dagur into working for him, by threatening her. After the battle was over, Dagur and Arthur became friends, before Dagur left to go back home with his mother.

Several months later, however, when Rustler returned, he destroyed Dagur's house and killed his mother, and took the young fox as a slave. Then when Arthur came to free the slaves, he found Dagur there, and when they had all escaped, they became best friends and Dagur made Cuddletown his new home. After a while, Arthur asked his own parents if they could adopt Dagur, so they did, and they are almost just like twins; they are the same age and look similar, though their birthdays are different. Now they stick side by side constantly, as if they were born together, and they would each do anything for the other. They have been through countless perils together.

Arthur fell in love with Jazz when he was on an undercover mission, infilterating Callaghan's army, which Jazz was part of. She never realized he actually loved her, but when the mission was over and Arthur returned to Cuddletown, he wanted Jazz, so Mars brought her there. She was surprised at appearing there so suddenly, but she had never really wanted to be bad, so she agreed to give up working for Callaghan and stay in Cuddletown with Arthur. They have been through many adventures together since then.

Arthur (left) as the King of Fox Island, and Dagur (right), by Tuff 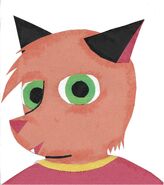 Paper collage of Arthur by Tuff :)

Dagur finds him injured (by Spikes) 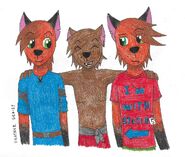 Add a photo to this gallery
Retrieved from "https://stuffedfriends.fandom.com/wiki/Arthur?oldid=4274"
Community content is available under CC-BY-SA unless otherwise noted.